DestinationsVoyage to the heart of Russia (7 ds/6 ns)
﻿

Meeting with the local guide. Transfer to the hotel. 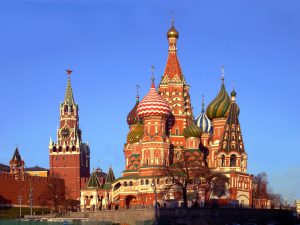 Moscow is the biggest city in our country that has the most interesting cultural and historical places such as Red Square, the St. Basil’s Cathedral, Kremlin, the Bolshoi Theater, the Cathedral of Christ the Saviour and etc. Today you will know history of Russian capital and also you can see the modern part of our city full of skyscrapers and business centers. Moscow is the heart of our country and the main city that you should visit  if you want to travel to Russia. In the afternoon you will have a walking tour to the Moscow metro. The Moscow metro is one of the most beautiful metro in the world. Actually it was built in 30-s of the XX c. and it was constructed as a symbol of the Soviet people’s achievements.

Today you will have a very interesting excursion to the Moscow Kremlin – the main part  of  every excursion program. Here you will see  such famous monuments as the Tsar Bell, the Tsar Cannon, the Ivan the Great Bell Tower and the Russian orthodox cathedrals.

After tour we will have a transfer to the airport.

Arrival to Kazan. Meeting with the guide.

Kazan is one of the most beautiful, modern and comfortable city in Russia. Local 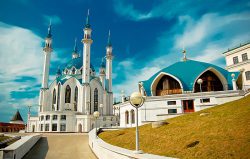 people believe that Kazan is the 3 capital of Russia (the first is real capital – Moscow, the second – is cultural capital St.Petersburg). During the excursion you will visit the Kazan Kremlin – the main sight  in Kazan. The Kremlin was built in the XII century and you can still feel the atmosphere of those days. Here you will have an opportunity to visit the Kul Sharif Mosque – the largest and most beautiful mosque  in Russia. Also you will see here the Orthodox Blagoveschensky (Annunciation) Cathedral, and the Leaning Tower of Syuyumbike and etc. After that we will have a walking tour through the Old Tatar Settlement and the famous pedestrian street Bauman – here you can buy some souvenirs.

Sviyazhsk is an island that is situated only 60 km from Kazan. This town was built by order of Ivan the Terrible as a fortress to seize Kazan in the XVI century. Nowadays Sviyazhsk is a unique place that kept the atmosphere of old Russian culture.Transfer to the airport or r/w station. 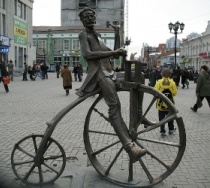 During city- tour you will learn the history and legends of Ekaterinburg. The excursion starts in the heart of Ekaterinburg –the Historical Square of the city where you will see the city plan, the monuments of the city founders, the dam, the Chapel of St.Ekaterina – the patroness of the city. During the excursion you will walk along the old streets of the city that represent the style of the XIX century, see the unique monuments of industrial architecture of the XVIII century, mansions of the XVIII-XIX century – the Sevastianov's mansion, Kharitonov-Rastorguev's mansion, learn the literary and theatrical life of Ekaterinburg and also see the face of modern Ekaterinburg -city. You also will visit the Church on the Blood that is situated instead of Ipatiev House where Nicolas II and his family lived and were killed. After lunch you will visit the Monastery Ganina Yama where you will know about history of the last tsar and his family. After you will visit an amazing place – the Border between Europe and Asia

Today we will go to Nevyansk – the oldest center of the Ural Steel. During the excursion you will visit the monument of the XVIII century Nevyanskaya Leaning Tower, see the first lightning rod, a secret laboratory for the money production, the auditory room where you can hear every word spoken in a whisper, the antique English clocks, which were more expensive when buying the tower itself.

Please contact us by e-mail office@tour-to-russia.com, via our website or by skype to get special prices for individual tour to Russia in any language for different number of people, to reserve the dates or ask the questions! We can redesign the program according to your wishes!

Russian citie and excursions To order