Ekaterinburg is situated in the Ural Mountains, at the border of Asia and Europe. In 2010 the city’s population was 1,350,136 people that makes Ekaterinburg the Russia’s fourth-largest city . 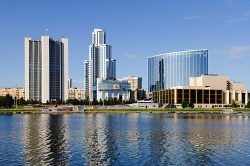 The city is named after Catherine, the Empress and wife of Peter the Great. It has been a key point on the route from Europe to Asia for several centuries (“Siberian Route” from XVII century). Since the late XIX century the city has been an important stay on the Trans-Siberian Railway, with lines radiating to all parts of the Urals and the rest of Russia.

Founded in 1723 by the famous Russian reformer Peter the Great as a manufacturing town, Ekaterinburg has remained one of the major industrial centres of today’s Russia. The main activities of the region’s industry are machinery and metal processing, as well as ferrous and non-ferrous metallurgy.

The Urals contain 48 species of economically valuable ores and minerals. The specialty of the Urals is precious and semiprecious stones, such as emeralds, amethysts, aquamarines, jasper, rhodonite, malachite and diamonds/

Ekaterinburg is rich for historical and cultural events as in the past as nowadays. Many historical buildings of different periods you can observe here: merchant mansions, first stone buildings of XVII century, monuments of Soviet constructivism, modern skyscrapers, etc.

Ekaterinburg is the only Russian city ever to be featured on the UNESCO list “12 ideal cities in the world” in 2002.